Portland Bill – from the Armada to present day. 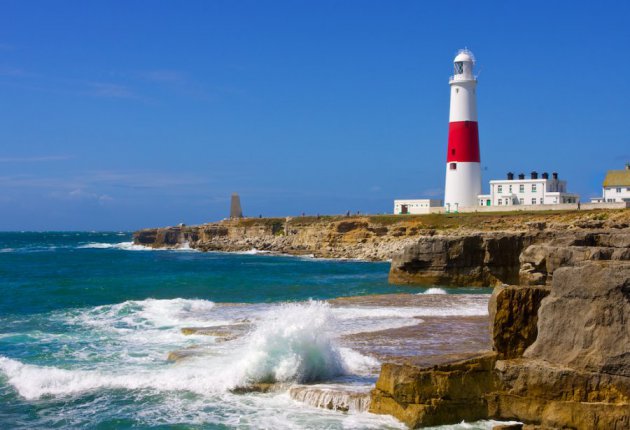 Portland Bill, and its Lighthouse are one of Dorset’s most famous landmarks. Portland Bill’s name has its roots in ‘The Beels’ as noted in early maps, probably from its beak shape. The Bill was formerly known as ‘The Beacon’ due to its prominent and important position as a warning station during the Armada invasion. The Bill has remained an important part of England’s defenses, in World War II it was to site a new radar station.

The current red and white lighthouse was built in 1906 to replace two older lighthouse. It is now remotely controlled, and remains important for local shipping, to protect them from the notorious Portland Race, which can reach 4m per second. Hilaire Belloc‘s book The Cruise of the “Nona“ is about sailing near Portland, and the reflections it occasions. He describes Portland Race as “the master terror of our world”, and says “… if you were to make a list of all the things which Portland Race has swallowed up, it would rival Orcus“.  The Lighthouse was refurbished in 1996, with a new visitors centre, which offers guided tours of the Lighthouse.

Portland itself has been inhabited since the Mesolithic period. It is perhaps most famous for its ‘Portland Stone’ which is limestone. Sir Christopher Wren, who was the MP for Weymouth used 6 million tons or Portland Stone to rebuild parts of London after the Great Fire, including St Pauls Cathedral. Wow, i’m surprised there is any Portland Island left!

Cytringham Cottage is a a two minute stroll from Portland Bill Lighthouse.