Follow in the footsteps of Thomas Hardy in Dorset

Enjoy the literary highlights of Dorset

Thomas Hardy’s Dorset life has long been a draw to the county. His literary works alone conjure up images of hazy sunny country days and paint a picture of the life and strife of rural living. Born in Higher Bockhampton, just outside of Dorchester, Hardy was a Dorset lover through and through. This came through in his literary works; his cast of characters live in the semi-fictional Wessex, and can be pin-pointed to existing places in Dorset today.
If you’ve been drawn to ideas of following Hardy’s footsteps through Dorset as a means of exploring this wondrous county, here’s what you should be looking out for:

The National Trust owned cottage where the poet and novelist was born now has its own visitor centre and coach drop off point, making it a very accessible way of getting to know Hardy. The quaint, typically English cob and thatch cottage is by no means grand nor unusual, but it has been kept in the style of the Hardy family with the furniture of the era. Peer into each room of the house to gain a unique understanding of Hardy’s mind’s inner workings.
The surrounding garden and orchard is just as beautiful now as it was when Hardy lived here. The grounds were a source of inspiration for Hardy’s poems and novels, so you can imagine how important their upkeep is. The walkway through the woodland which Hardy knew so well is open for your enjoyment too.

Stay just outside of Dorchester at Cheeseman’s Cottage 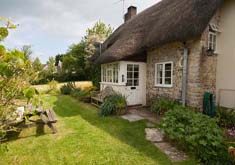 Throughout Dorset’s landscape are myriad footpaths and trails inspired by Thomas Hardy himself. They are walks that he would have enjoyed during his lifetime and showcase the best of the countryside. Featured in his novels are the wildlife and landmarks from these walks. Leaflets are available from the National Trust visitor centres or online. https://www.nationaltrust.org.uk/hardys-cottage/features/a-walk-in-hardys-footsteps

Where Hardy live for a short period and eventually wrote The Return of the Native, Sturminster Newton is yet another quintessentially Dorset village. Picture perfect cottages and the wonderful Mill make it a lovely place to visit. It is easy to see how this village inspired Hardy, with the lovely community atmosphere and lots of things to do. 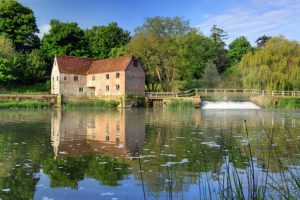 Stay just outside of Sturminster Newton, at The Merlin

Just on the outskirts of Dorchester, and within walking distance of his cottage birthplace, Thomas Hardy designed Max Gate himself. Here he lived with his first wife Emma, then second wife Florence until his death. The Grade I listed brick country house couldn’t be further from the style of Hardy’s birthplace cottage. It was at Max Gate that he wrote Tess of the D’Urbervilles, The Mayor of Casterbridge and many more literary works. Again, now owned by the National Trust, Max Gate is open to visitors year round. Filled with recreations of how Hardy would have lived in the house, you can appreciate the views from the huge windows and soak up the atmosphere that got Hardy’s literary juices flowing.

Of course there is a gorgeous garden to wander through, having been created from scratch by Thomas Hardy. Don’t miss the pet cemetery where the terrier Wessex was buried.

Lulworth Cove, featured in his novels as Lulwind Cove, is a must-see while you’re in Dorset. And we have just the cottage for your stay! Lulwind sleeps 5 in a whitewashed, cosy thatched cottage a stone’s throw from the namesake beach. 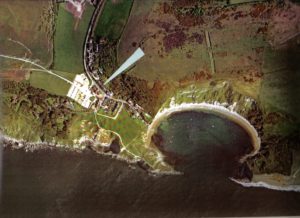 There is no better location in Lulworth for your stay than Lulwind Cottage.