Dorsets Most Haunted at Halloween

Dont worry, none of our Dorset holiday cottage guests have ever reported any hauntings, but read on for the most spooky places in Dorset.

As the Autumn leaves fall, we turn our attention to the beautiful month of October. Our ancient, deciduous woods are carpeted with a rich blend of autumnal hues, the seashore turns from a sun drenched paradise to a heaving, grumbling, rugged expanse and it is also the time of All Hallowes Eve, when our visitors take on a more ethereal form.

At this time of year, if you decide to visit Dorsetshire, take time to huddle in front of a spitting, open fire in the cosy, olde pub, listening to the tales of locals. But ye remember, as you venture home through moonlit lanes, past the ancient cemetery and castle ruins, the tale of the screaming skull, of the headless lady and the phantom army.

Bettiscombe Manor is home to an ancient screaming skull. Formerly buried in the village cemetery, the skull disturbed the local residents so much that it was relocated to the manor. The manor house is located just west of Beaminster and was the seat of the Pinney family. The skull is said to be that of a former slave who swore to haunt his master until his body was returned to his native land. 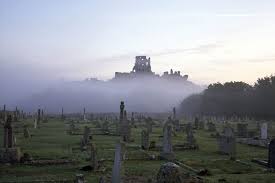 Corfe Castle, in Dorset is the site of a siege, royal murder and has a history dating back to 6000BC. Is it therefore unsurprising that the village and castle are frequented by a roaming spirit or two. The headless woman repeatedly seen at the main gates to the castle, is said to be that of Lady Bankes, who was betrayed during the civil war, leading to the ruination of the former Royal Castle.

Creech lies in the heart of the Isle of Purbeck. So much paranormal activity has been reported in the area, that local author David Leadbetter has written a book on the subject. Captain Laurence of Creech Grange, is said to have seen a ghostly army appear on the top of the Purbeck Hills that surround the estate, this was the first sighting of the clashing armies in 1678.

Send us your other worldly encounters and haunting stories to enq@dhcottages.co.uk or on our facebook page